Adelaide is the only city in the semi-arid state of South Australia. It is one of five Australian cities that is home to more than a million people.

It is a fairly typical Australian city in many ways. Adelaide experiences warm to hot summers and has many nearby beaches. Residents mostly live on large suburban blocks and prefer to travel by car.

The city is known for its planned and generously spaced layout. The grid design gives easy access to the different parts of the city, including campus grounds of the universities. 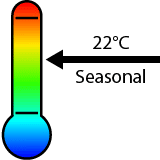 Adelaide stretches 90km north-south along the coastline of the Gulf of St Vincent. It is 20km wide, with the eastern side bordered by the Mount Lofty Ranges.

The city is built on the Adelaide Plains. Several rivers and significant creeks flow through the area, the most notable being the Torrens River.

The climate has a Mediterranean quality. It is warm and dry in the summer, with low levels of humidity. However, the winter months can be cool and typically produce good amounts of rainfall. 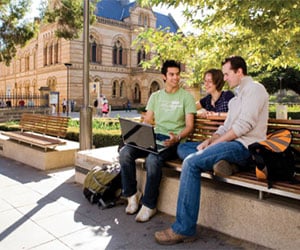 Adelaide supports 4 universities with campus locations across the city but concentrated around the CBD. Generally, the universities offer a balanced set of courses and have a strong representation of international students.

The University of Adelaide is the city’s prestige teaching institution. It has an international reputation for academic research and tends to attract the strongest local students. Its teaching facilities are mostly located on a single campus in the city centre.

The University of South Australia is Adelaide’s largest university and was formed in 1991 by the merger of non-university teaching institutions. It has six campuses, four of which are in the city. The largest campus, City West, is close to the University of Adelaide. Another of its major campuses, Mawson Lakes, is 12km north of the CBD.

Flinders University was founded in 1966 after demand for university places went beyond the physical capacity of the University of Adelaide. It is located on a large campus 12km south of the city centre.

Torrens University has been recently established in the Adelaide CBD. The uni offers bachelor and masters degrees in fields such as education, management, media design, and public health.

Adelaide has been described as a “big country town”, a tag that has also been applied to other Australian cities such as Perth and Canberra.

The planned city has wide streets, tree-lined boulevards and large expanses of recreational parkland. There are few major built-up areas away from the city centre. It has a spacious quality that you don’t normally find in cities with a million-plus people.

Adelaide students place a premium on living close to the city centre – giving quick access to facilities and night-life. For close to half the city’s university students, living centrally also places them within walking distance of classes.

Public transport in Adelaide is limited in many places because of the low-density layout. The Adelaide Metro provides whole-of-city bus services, which are complemented by rail, an inner-city tram loop and the Adelaide-Glenelg Tram. Services are mainly to and from the city.

A popular weekend destination is the beach-side suburb of Glenelg. It has many restaurants and cafes positioned just a short walk from a beach and jetty.

Adelaide, along with the Barossa Valley, is famous for the many wineries and related tourist attractions positioned close to the city. The Adelaide Hills is another a popular short-drive destination, offering quaint towns, scenic views and nature trails.