Australia has some of the top cities in the world for university study and for students to live in. They offer the combination of excellent universities and high living standards.

Australian cities and towns attract close to 300,000 international students each year. Nearly one in three university students are from abroad, including from China, India, Korea, Vietnam and Malaysia. They add a global flavour to university life in Australia.

It is interesting to compare Australian cities as places for university study. While there are many similarities, each city has its own qualities. For students coming to study abroad, knowing about the different cities can be useful. It helps to choose a university city and make the most of what the place has to offer. 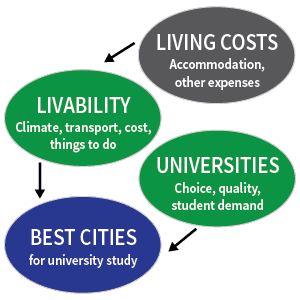 Australia’s best cities to study and live in are ranked based on three things.

The most livable cities for students in Australia include Melbourne, Brisbane and Wollongong. Livability depends on factors such as living costs, climate, culture, transport and layout.

The cost of living is an important part of livability. Differences in living costs between cities are mainly due to variations in housing prices. Our cost of living index reveals the cheapest and most expensive places to live. It also shows how city choice affects student budgets.

The best university cities have quality universities and give students choices about institutions and courses. They also tend to attract international students. Melbourne and Perth are top Australian cities for course choices and drawing students from abroad.

Melbourne is rated as Australia’s top city for students.

It is comfortably Australia’s biggest student city. There are an estimated 270,000 university students in Melbourne. More than a third (91,000) are international students.

The city offers students a wide range of education choices, with 8 universities based in the city.
Melbourne is also Australia’s most livable city because of the cultural entertainment on offer plus good public transport.

Adelaide is another attractive city for students to live in. Adelaide has solid numbers of international students, with 27 per cent of students from abroad. Consistent with its size, the city has 4 universities.

University quality in Adelaide is the highest nationally, although not by much. We found that all major cities have both high and low ranking universities.

Adelaide is a relatively cheap place to live due to low accommodation costs.

Perth is a fantastic study destination, though a little pricey.

Perth’s student numbers are similar to Melbourne but on a smaller scale. International students also represent a third of all university students.

Perth offers plenty of educational choice, with 4 universities in a city that is less than half Melbourne’s size. The average quality of universities is slightly better than in Melbourne but fractionally lower than in Adelaide.

Living costs in Perth are relatively high. It is the second most expensive city after Sydney. The high living costs do, however, reflect a strong local economy and job market.

The proportion of study abroad students in Brisbane is 22 per cent, about 6 points below the national average.

The city offers students reasonable choice. Although only 3 universities are based in Brisbane, several others have teaching facilities in the city. University quality in Brisbane is slightly above average.

Brisbane is the second cheapest major city to live in after Adelaide.

Five universities are based in the city, with an average quality similar to other major cities.

A drawback to Sydney is the high cost of renting. It is the most expensive major city in Australia.

Wollongong is tough to beat. The city of less than 300,000 people is home to a reasonably large university that is one of Australia’s best.

The University of Wollongong has 27,000 students, with more than 10,000 from abroad. The university is ranked 2nd by University Reviews Australia – based on university reputation, course ratings and graduate salaries.

Wollongong is 80km south of Sydney and its housing prices are about average for Australian cities.

Canberra is Australia’s capital and another quality small-city for student living.

Canberra has 2 universities, including the top-ranked Australian National University. The city has 35,000 students, 9,000 of whom are international students.

While Canberra provides a great environment for university study, it can also be an expensive place to live.

Hobart could be a good choice for students looking for a cheaper city. It comfortably has the lowest accommodation costs of the university cities.

Hobart is home to a single university, the University of Tasmania (UTAS). UTAS caters to all of Tasmania’s on-campus university students and is a fairly typical Australian university. It has 20,000 students, with just over a quarter from overseas.

The Gold Coast is a dream city for university study if you can find a good course for you. The city is Australia’s most popular tourist destination and an increasingly popular study destination. It has great weather and beaches, and plenty of entertainment.

The Gold Coast has the largest campus of Griffith University and is home to Bond University. It also has campuses of two of Australia’s cheapest universities for international students – CQUuniversity and Southern Cross University.